I wrote about my appreciation for Jim Fidler's music, and the friendship between us that grew out of it, in this spot two years ago when I heard his From The Inside Out album. It became one of my favourite records of 2009 and was robbed of the best reggae album Juno Award nomination it deserved.

Jim has a new album titled Up That River coming out in December, but he's introducing it with a trilogy of EPs featuring material from the LP, dub mixes and acoustic versions. I've listened to the first two, and he's on to something good again. 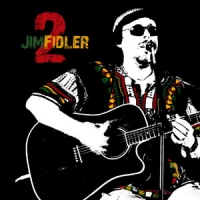 All the material was recorded, mixed and mastered by Jim at his Roots Cellar studio in St. John's, Nfld. He produced, engineered, played most of the instruments and sang lead.

The first EP opens with "Intro (Joesph)," a short number featuring Jamaican-born Newfoundlander Keith (Joseph) Rickman talking about Jim in an excerpt from a forthcoming documentary about this multi-talented man being made by his wife Lillian.

Jim played me "Be Free" and "Leslie Street" in his studio when I was in St. John's for the 2010 Juno Awards. I liked them both right away and I'm glad that more people will finally be able to hear them. "Be Free" is a melodic roots reggae number with female harmonies not unlike those of Bob Marley's I Threes. It also comes in a dub version. "Leslie Street" is lyrically moving and showcases the best of Jim's voice along with some well-played guitar lines.

The EP is rounded out by "Operation Africa," which has a lighter pop funk groove along with jazz and reggae influences.

I've heard Jim perform Marley's "No Woman No Cry" before, but he'd never recorded it until recently for the 2 EP. And he goes one better by including a dub mix along with his interpretation of the reggae classic. Rory Hoffman, the only musician other than Jim to contribute to these two records, adds some sweet saxophone and clarinet to both.

The 45-second "Here Come the Katz" leads into "Cats Will be Katz," a largely instrumental number with jazz elements and the recorded debut of Lillian's voice. I prefer "Me," a rhythmic track with a fun mix of blues, pop and harmonica by Hoffman.

The third EP should be arriving soon, and all of them can be purchased from Jim's website. Each EP purchase entitles the buyer to a three-dollar coupon towards the purchase of Up That River.