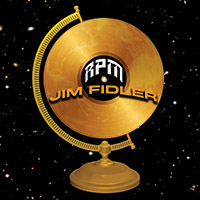 It took Jim Fidler eight months to finish RPM, and now that it's all said and done, he believes it is one of the best records of his career and certainly one that he had the most fun making. "The album is like that undefinable genre of the 70's where we all listen to the same radio station," he said. "I've always made conscious music, but this one is a whole heap of fun. It's made to be played on big speakers."

Fidler spoke about how the album brought him back to the 70's, the era that he began to cut his teeth in the industry, and how that served as a huge inspiration in his work today. "I wasn't thinking about reggae, Celtic, or jazz, I was just thinking about music," he said. "It harkened my mind back to a time I haven't forgotten and in that mind frame I had a huge pallet to work with."

Ever insightful, he went on to add that the music flowed through him effortlessly, in a very organic and natural process. "All the lyrics on this record are what they call stream of consciousness," he said. "I didn't sit down with a pen and paper and write them down, they just came to me. It wasn't an intellectual endeavour, it didn't come to my head in that clever place, it just passed through me. I know that sounds strange, but such are the arts." - excerpt from Keeping the Arts Alive by Dillon Collins - read the entire article here