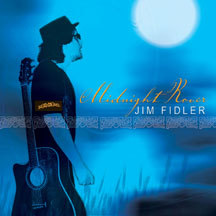 Jim's third solo recording is a beautiful mix of haunting melodic pieces and beautifully crafted songwriting. While this album is comprised mostly of original material; Jim does his magic to A Pair of Brown Eyes by Shane MacGowan, Avalon by Roxy Music by Brian Ferry and Fields of Gold by Sting.

Recorded, mixed and pre-mastered by Jim Fidler at THE ROOTS CELLAR
Engineered by Jim and Lillian Fidler

Customer Review: New(foundland) Music by Newf In Town A great compilation, well engineered and completely listenable. Melodies lilting and haunting, some original, some traditional, the exact style defies strict definition. Part Celtic, part South American, part Pop, made more remarkable by the fact that Jim Fidler is responsible for most of the sound and the sounds on this album. Highly recommended not only for tradtional music afficianados, but for anyone who can appreciate simple melodies, elegantly and eloquently portrayed.