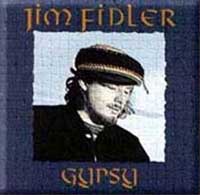 Released in 1995, Gypsy was Jim's first self-produced solo album of original material. The album won album of the year and independent album of the year at the Music Industry Association awards in Newfoundland and Labrador and was listed as one of the top 25 albums in Canada by CBC Radio's Roots and Wings. Gypsy is one of the top selling albums of all time at Fred's records in St. John's, Newfoundland.

All words and music written, arranged and producecd by Jim Fidler with the exception of "Bound for St. Pierre" written by Jim and his brother Phil Badcock.