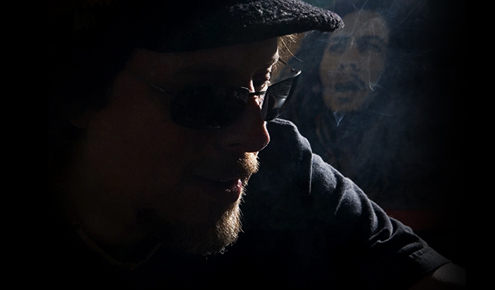 A born musician, singer/composer/multi-instrumentalist, Jim Fidler lives on the north atlantic island of Newfoundland. He attended the school for the blind in Halifax, Nova Scotia after going blind at the age of 9. In Halifax he studied classical piano and music theory at the Maritime Conservatory of Music as an honours student. He has been involved in a multitude of musical projects since; composing, playing and producing everything from bluegrass to reggae.

Jim's live performances span 30 years. His first highly successful bluegrass group was formed in Halifax when he was in his teens. In the late eighties he formed Newfoundland's first reggae group, Pressure Drop, in which he was the lead singer, drummer and writer. The group was a popular dance band and produced a large following and went on to tour extensively and make appearances on Toronto's Much Music and Ear to the Ground.

In 1995 Jim produced his first solo CD, Gypsy, which started him on the path of a solo career. Gypsy was a completely self-written, self-produced album on which Jim sang and played twelve different instruments. The album won awards for Album of the Year and Independent Album of the Year in Newfoundland And Labrador, a nomination for an East Coast Music award in the category "roots/traditional", and CBC Radio's national program Roots and Wings selected GYPSY as one of the top 25 albums from around the world in the fall of 1996. In 1997 after hearing the album, Iona Records President, Ronnie Simpson signed Jim to a European record deal, the first for a solo Newfoundland artist.

Mark Vaughan Jackson of the Evening Telegram wrote this about the album:There is no musical genre or label that fits this album. There are influences from Newfoundland, Jamaica, North Africa, Portugal and Spain, Ireland, the Gypsy tradition, folk and others. But they are not just Fidler's versions of these musical styles - he has taken them, interpreted them and then used some of their influences to flavour music that seemingly comes straight from his soul.

Jim released his second solo album Friendly Fire in November of 2000. This album again is completely written and produced by Fidler and features Mary Jane Lamond and other reknowned musical guests.

...And throughout it all, Fidler is there performing on his usual multitude of instruments and welcoming guest musicians to add Gaelic words, Arabic chants, smooth sax lines, skirling pipes and more. This is a more eclectic recording than Gypsy, which had a tad more of the acoustic traditional sound in its pedigree. With Friendly Fire we have a broader electronic soundscape, club-style drum effects and the judicious application of distortion effects to add a few pleasantly jagged edges. Mark Vaughan Jackson - The Evening Telegram

From 2002 through 2003, Jim brought together some of the finest musicians from Newfoundland and St. Pierre et Miquelon, The project, "MUSAIK, IN THIS WORLD", is a call for world peace and blends styles as diverse as North African Raai, Reggae and Celtic music. The album is also linguistically diverse, being about half and half in English and Arabic, with some French thrown in for good measure. Jim's hope for this CD is to reach a broad range of people and to encourage not only tolerance, but mutual, cross-cultural respect. It was recorded and mixed entirely at Jim's studio, The Roots Cellar, and was nominated for an ECMA in 2004.

In June of 2005, Jim released his fourth recording, Midnight Rover, a rich and sometimes playful journey inspired by 2 musical trips to Ireland. This article from the Newfoundland Herald describes the album: This new album is filled with Fidler's trademark Celtic sound as well as soothing instrumentals. However, there are some pop influences as well. Included on the album are covers of Roxy Music's '80s classic Avalon and Sting's romantic Fields of Gold, both almost as good as the originals. Fidler recently organized the first-ever Atlantic Crossroads Festival, a musical extravaganza that showcased the best of Irish and Newfoundland singers at various local clubs. Fidler is also involved with a new podcast radio program entitled Republic of Avalon Radio, which showcases local music.

In 2009, Jim returned to his reggae roots with the release of the album Revolution Time; Karla Hayward of the Telegram wrote this about the album:Jim Fidler has a lot to say. And listening is a real pleasure. From global warming to the psychological effects of television, Fidler’s got a firm stance well supported by real information, expressed succinctly and with enough humour to keep things interesting. So, obviously a new solo album is the perfect way for this talented musician to “get the message out,” as it were. “Revolution Time” is the Fidler’s latest creation and it’s definitely a return to his reggae roots. While the influences heard in each song vary from jazz to calypso, there’s a solid thematic thread that holds all together in perfect concert.

Up That River was released in 2011. In true Fidler style, this album is an eclectic mix, with many influences including pop, blues, reggae, celtic, americana, folk, ballad and probably lots more.

Jim's latest album, RPM, was released in November 2013. It took Jim eight months to finish RPM, and he believes it is one of the best records of his career and certainly one that he had the most fun making. "The album is like that undefinable genre of the 70's where we all listen to the same radio station," he said. "I've always made conscious music, but this one is a whole heap of fun. It's made to be played on big speakers."

Ever busy in the studio, Jim has already composed and produced music for another 3-4 albums. Stay tuned!