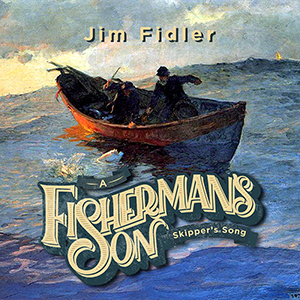 On July 2, 2022, the 30th anniversary of the issuing of the cod moratorium, Jim Fidler released his new single, 'A Fisherman's Son (Skipper's Song). The song tells the story of a displaced Newfoundland family that had to leave home and go elsewhere to make a living and the return of the grownup young son to raise his family in Newfoundland, as he promised his father.

The song was inspired by working with the Newfoundland group Hamilton Sound on a song called 'The Whistle Don't Blow (The Bell Island Miner's Song). Jim spent much of his summer vacations from the School for the Blind in Halifax, NS, visiting and staying with friends on Bell Island during his teen years. While producing the song for the group, and thinking about the close down of the mines on Bell Island, Jim began reflecting on the broader issue of the cod moratorium and 'A Fisherman's Son' was born.

Completely blind since the age of 9, Jim has dedicated himself to his true passion and calling - music, and expressing himself through his music. His foundation as a classically trained pianist led the way to adopting and excelling at many other instruments. As a solo performer he can woo a crowd with just a guitar; he also loves to play drums and sing which he did with the successful reggae group, Pressure Drop.

Jim spends much of his time in his own studio, creating and producing his own blend of musical styles. He uses his production tools much as an artist uses a paintbrush and paints soundscapes. His broad view of the world and different genres of music has seeped into his own style and you might hear hints of pop, rock, arabic, french, latin, african, reggae, or amerikana in any particular song.

Thank you for visiting and please have a look around - there's lots to check out such as: Jim's discography, some very interesting media interviews, videos of live performances, special episodes of Jim's podcast, Republic of Avalon Radio and lots more. Jim Fidler is not just a talented multi-instrumentalist, composer, songwriter and producer, he is a man with incredible vision and a message to share with those who would like to listen.